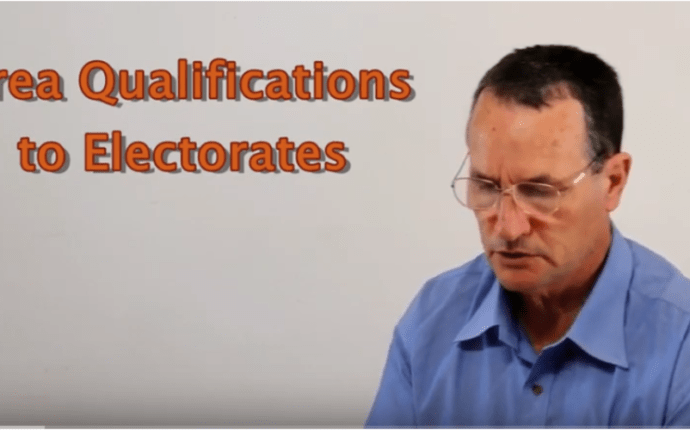 The Essential Need of Area Qualifications for Electorates.

People in Australia are governed by members of parliament that are elected democratically, but I will explain that there are varying degrees of democracy.

Democracy is normally described as ‘One man, one vote’, which I will call Basic Democracy. But you and I have never had ‘one vote’ in any government legislation. Australians actually do not have democracy expressed as ‘one man, one vote’.

Basic democracy has been modified to ‘we the people’ electing members of State and Federal parliament to vote and govern on our behalf. This is for the practical reason that we cannot all attend parliament and vote.

A further modification to democracy is the Australian Federal example of each state, regardless of population, having twelve senators each in the Senate. This is to prevent the people in the more populous states of NSW and Victoria, with their much greater number of members of the House of Representatives, from dominating all the other less populated states.

I have described these modifications of democracy to show that there are different degrees and types of democracy.

There are reasons for the relative growth in population in the more densely populated areas. One of these, and I think the main reason, is that these areas contain the greater number of politicians, and as politicians normally possess great ambition to be re-elected, they cause a lot of public money to be spent building public infrastructure such as hospitals, universities, high schools, primary schools, and locating government bureaucracies in their electorates. They also build swimming pools, entertainment stadiums and on and on. These create and maintain high employment and population growth, and this growth attracts its own growth,

This infrastructure construction does not happen at all in relatively less populated areas, or at most it happens at a much lower level.

Since the first NSW state election after Federation, in 1904, on average, every five years one electorate has evaporated out of the non-metropolitan areas and condensed into the metropolitan areas.

Assuming this long-term trend continues, in 40 years’ time there will be only one electorate, and consequent member of parliament, west of the Great Dividing Range, and ninety two on the coast, with the vast majority in the Newcastle, Sydney and Wollongong areas. For the people west of the Great Dividing Range; this is not representative government.

It is essential for representative and beneficial government that area qualifications apply to electorates.

One essential area qualification is a  maximum size limit on the area that an electorate can contain. This will ensure that the people in relatively less densely populated areas will retain an effective amount of representation in parliament.

Another essential area qualification is a maximum limit on the number of electorates in a percentage of the area of the state. This will ensure that while a relatively densely populated city or area can evolve, it cannot politically dominate the people in all the other areas.

In the image displayed, no electorate is larger than ten percent of the area of the state, regardless of population. This ensures that the people in all areas are effectively represented in parliament and are not overwhelmingly dominated, as in NSW.

There are additional electorates for the larger population centres, such as Albury and Wagga with three, Broken Hill and Griffith with two, and Leeton with one. There are smaller electorates containing approximately 10,000 voters around the smaller towns of Deniliquin, Moama and Tumut.

The south east area, marked in blue, is approximately ten percent of the area of the possible Riverina state, and is the most densely populated area. This area contains approximately 120,000 voters. Despite its population, it is limited to no more than ten electorates, and ten consequent members of parliament. In this example, Wagga and Albury cities have an additional three electorates each, Howlong and Corowa area; one, Tumut area; one, Cootamundra and Temora area; one, Culcairn, Holbrook and midland areas; one; being a total of ten.

Area qualifications are a further modification of representative, democratic, government.

The people in the south east, despite this limitation, and in fact, all the people in this Riverina State example, have much more representation than they do in the NSW parliament.

The lack of area qualifications, and consequent lack of political representation, and consequent formation of legislation detrimental to the people in the non-metropolitan areas, most obviously recent water and timber industry restrictions, has ensured that NSW will split into multiple states.

Electorates with area qualifications will guarantee effective representative government, they will increase the likelihood of good governance for all the people in the state, and consequently vastly increase the prosperity and happiness of the people in The Riverina.