Home/Uncategorized /The Honourable Mark Latham Calls for N.S.W. to Withdraw from the Basin Plan (Video).
Uncategorized

The Honourable Mark Latham Calls for N.S.W. to Withdraw from the Basin Plan (Video). 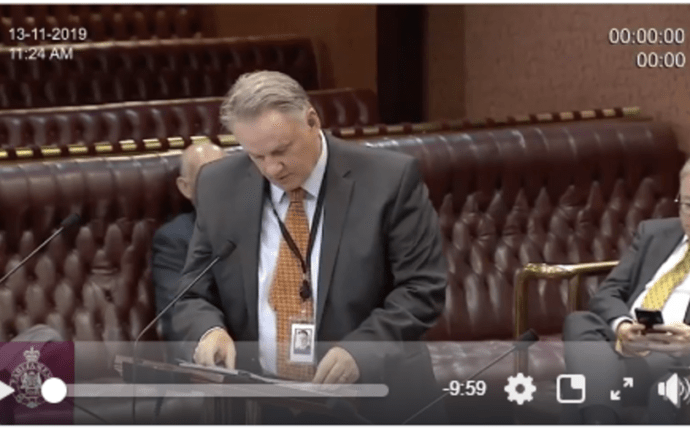 Mark Latham has been in the N.S.W. parliament for only eight months, and he is the first parliamentarian in seven years, out of the current total of one hundred and thirty four (and not including the ones that have come and gone since 2012), to call, in parliament, for the withdrawal of N.S.W. from the M.D.B.A. Basin Plan.

A great commendation to The (Genuinely) Honourable Mark Latham.

It has taken seven years of devastation of The Riverina, two years of zero water allocation in the southern region, and a devastating drought throughout all the state, for one parliamentarian (again a commendation to The Honourable Mark Latham) to call, in Parliament, for N.S.W. to withdraw from the disastrous Basin Plan.

A great speech by The Honourable Mark Latham. Not great enough to distract The Nationals Ben Franklin on the right from his texting requirements; but still, great!

Will the parliament accede to Mark’s request, even with his quoting of the Deputy Premier and Leader of The Nationals – John Barilaro? Time will tell, but considering that Premier Berejiklian and Water Minister Pavey re-committed N.S.W. to the Basin Plan in March 2019, and that the Parliamentary numbers aren’t there; I don’t think so.

By promising to possibly ‘rip up the Basin Plan’ at the end of the year, I think John Barilaro is unwittingly displaying both his incompetence and ineffectiveness..

Politics in N.S.W. has shown, and will continue to show, that for the good of the People in The Riverina, The Riverina needs to separate politically from N.S.W; and the sooner the better.