Riverina State in the Tumut and Adelong Times 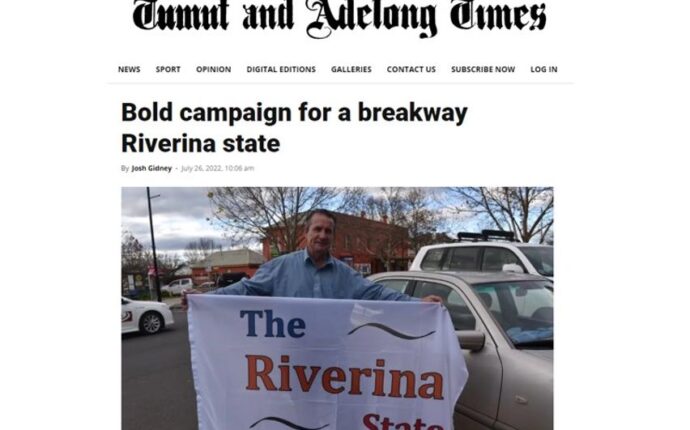 More representation and access to resources are major drivers behind David Landini’s campaign for statehood for the Riverina.

Mr Landini wants the people of the Riverina to have more access to the likes of native wood and water and the right to self-determination in an increasingly urbanised state, and has formed The Riverina State lobby group, which he plans to make into a political party which would push for the establishment of the Riverina as a separate state.

He has been travelling the region drumming up awareness and support for the campaign, and was in Tumut on Friday.

As he explains, the idea isn’t new.

Mr Landini, a businessman and former National Party member, is from Wakool, west of Deniliquin.

“There’s always been problems there, basically with the state government restricting the availability of water, and timber,” he said.

A turning point for him was when the then Labor state government turned a state forest in the area into a national park, therefore shutting down a timber industry.

He points to there being 71 electorates in NSW in the Sydney, Newcastle and Wollongong areas, and only 22 in the rest of the state.

“It’s an urban economy, with very little interest in what happens out in the countryside,” he said.

He fears the influence of The Greens and their voters, mentioning that in the 2019 state election, 435,400 people voted for The Greens, and that there are only 398,000 voters in the eight electorates west of the Great Dividing Range.

“The Greens are opposed to all natural resource based industries,” he said.

“The urban based politicians appeal to the own voter base first and the Greens second.”

“We haven’t got the numbers,” he said.

“We’re getting basically shafted and we can’t stop it, because we are in a democracy and majority rules. It’s not just the native timber and water; there was the council mergers, and they were very unpopular.”

He said there are two possible responses to this.

“We can keep going the way we are going, which is down the gurgler, or we can separate. We are too different to them. There’s only one solution I can see. Let’s do this,” he said.

Mr Landini has got the Riverina State website up and running and is raising awareness and support for this campaign.

“I intend to register and am in the process of registering a political party called The Riverina State and make this a political issue,” he said.

He is hoping to get enough votes to send a clear message, and bring about a referendum, which if successful would be used to gain the consent of parliament to form a separate state.

“They will consent because the people have spoken,” he said.

He called it the state of Murray and labelled it ‘rexit’.